How To Join Public Tenders in Turkey » Ongur Partners
Loading 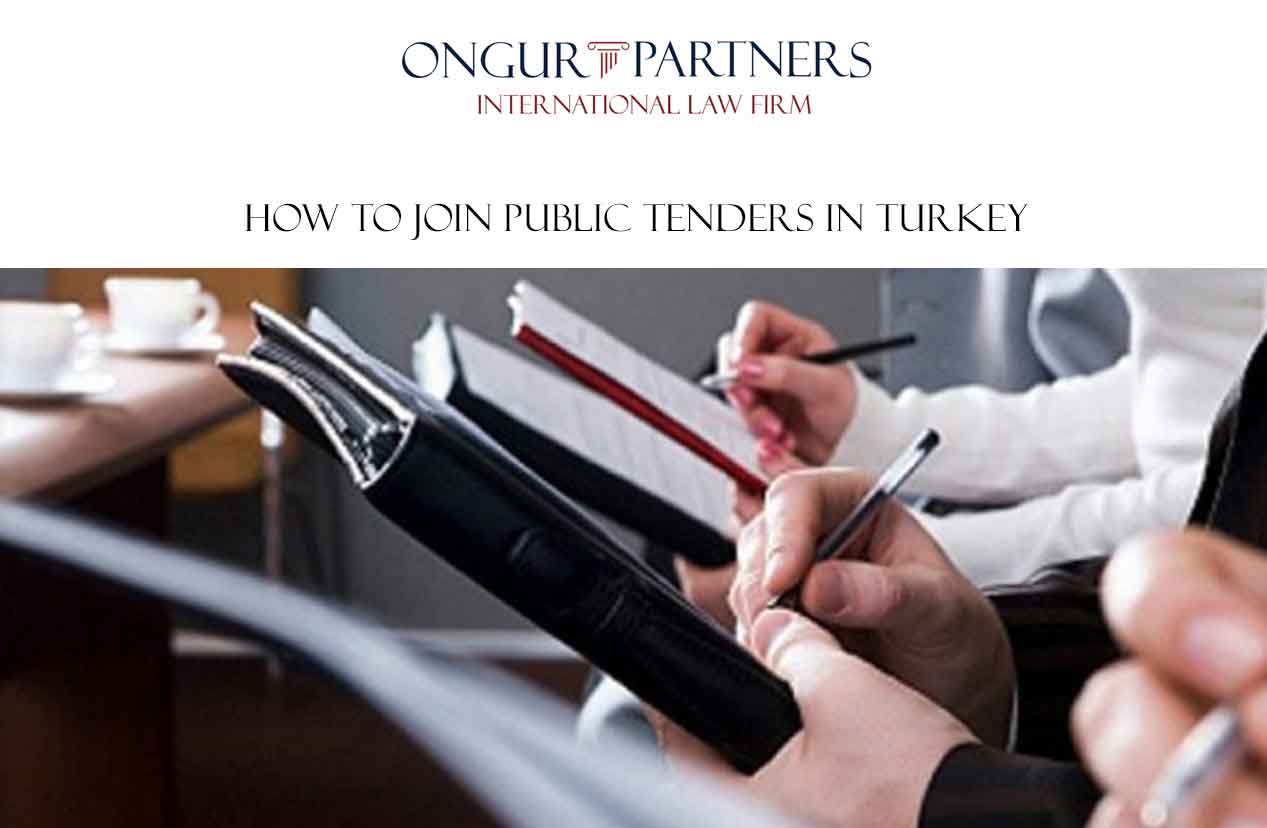 How To Join Public Tenders in Turkey

The public tenders became an  significant market,  for both national and international service providers in term of their scale and attractively in Turkey. The necessity of technical knowledge and the public service character of the business have given rise to the search of foreign participants as well. However, it is fact that for a foreign contractor, the laws and procedures of a different country is always complex issue. Therefore the necessity of providing some brief  information emerges regarding the general terms and conditions of  public tenders in Turkey.

The Law numbered 4734 has entered into force on 01.01.2003 as a result of EU harmonization process. The Law is very large in scope both in manner of the business type and the public administration which issues the tender. The scope of the law has defined under the Art 2 as tenders made by public administrations for procurement of goods, services and construction works. However there are also some exclusions regulated under the Art.3 of the Law; for example tender of tools, arms, military materials, equipments and systems for national defense, security and intelligence and tender of goods, services or works which are to be realized with foreign financing pursuant to international agreements.

Differently from the Law numbered 2886, 4734 has made it difficult for public administrations to issue tenders. According to the Art.5 of the Law numbered 4734 the procurement proceedings shall not be initiated unless there is a sufficient budget allocation. There are also some other principals regulated under this article of which its text indicated below:

Article 5- In tenders to be conducted in accordance with this Law, the contracting authorities are liable for ensuring transparency, competition, equal treatment, reliability, confidentiality, public supervision, and fulfillment of needs appropriately, promptly, and efficient use of resources.

Unless there is an acceptable natural connection between them purchase of goods, services and works cannot be consolidated in the same procurement.

Procurement of goods, services or works cannot be divided into lots with the intention of avoiding threshold values.

For the procurements to be held in accordance with this Law, the principal procurement methods are open and restricted procedures. The other methods may be used under the special conditions set out in the Law.

The procurement proceedings shall not be initiated unless there is a sufficient budget allocation.

Where the related legislation requires an Environmental Impact Assessment (EIA) Report for a works project, a positive EIA report must be obtained before the initiation of procurement proceedings. However, in works procurements to be made urgently due to natural disasters, EIA report shall not be asked.

The procedure of joining to the public tenders is regulated in between the Articles 30-35. According to the Art 30 “The documents required for joining tender including letter of tender and bid bond have to be put in an envelope. The name, surname, commercial name and correspondence address, the subject of the tender offer and the address of the administration of which tender made by have to be written on the envelope. The adherend part of the envelope has to be signed and sealed by the bidder. Letter of tender has to be signed and in writing. In the letter it should be indicated that the tender document is read and accepted. In addition, the bid price should be written in both number and writing, there shouldn’t be any defacement, erasure or correction on it and it should be signed by authorized people with their names, surnames and commercial names. In good procurement tenders, if it is indicated on the tender document that an alternative bid can be gave, the same procedures will be also applied to that. After completing these procedures tender offer will be given until tender hour to the administration in exchange of a rotation number”. According to the Art.40 of the Law numbered 4734 after receiving the offers, public administration starts to review the offers in accordance with Articles 37 and 38 and the tender is left to the bidder who has gave “the most advantageous bid economically”. The measure of “the most advantageous bid economically” has taken place newly in the Law numbered 4734.

The result of the tender will be declared to the person whose bid is accepted and to the other bidders within three days after the approval of tendering official in accordance with the Art.41.

The issue of contract is regulated under the Art.42. Within ten days after the conclusion of the period in the Art.41 (three days), the person whose bid is accepted will be invited to sign the contract in condition of giving the contract bond. To “foreign bidders” twelve days more will be given.

According to the Art.2 paragraph 4 of the Law numbered 2886 “the tenders are issued in the seasons when the most reasonable prices can be achieved, unless needed otherwise”. This provision makes it easier for public administrations to issue tenders.

According to the Art.16 bidders should give the documents completely requested in the tender specifications and declare an address in Turkey for notification. Differently from the Law numbered 4734, the Law numbered 2886 regulated different application procedures for each tender procedure.

According to the Art.37 in the sealed bidding offers should be given written in an envelope. On the envelope the bidder’s name, surname and correspondence address should be written as well. The adhered part of the envelope should be signed and sealed by the bidder. This envelope should be put in another envelope with the letter of guarantee and other requested documents. On the second envelope the name, surname, address of the bidder and the subject of the offer should be written. The letter of offer should be signed by the bidder and he/she should write that the tender specifications are read and accepted by him/herself. Offers which are not in conformance with these issues or have defacement, erasure or correction on it are not accepted valid. According to the Art.38 the offers should have given until the hour of tender in exchange of a rotation number. After making a review in accordance with the Art.40 public administration gives one of the decisions partaking in the Art.41. and declares it to those present.

It is regulated under the Art.44 and it is just a procedure applied in certain tenders existing in Art.44 as plane, warship, armament, airports, highways, railways etc. In this procedure the tender can be made between minimum three bidders who are accepted technically competent and powerful by public administration. According to the same Article in this procedure the names of the bidders should be declared to the regarding Minister and should be approved by him/her. It is not obligated to make an announcement in this procedure. If appropriate the invitation of the bidders should be made notwithstanding the Art 17,18, 19 with a pre selection announcement.

This procedure is regulated under the Art. between 45 and 49. According to the Art 45, this procedure can be applied in tenders regulated under the Art.1 of which its amount is under the amount determined by the General Budget Law, each year. In this procedure tender offers are made orally in front of bidding commission, also bidders can send their offers with an envelope in conformance with provisions in Art.37. After the review of required documents by commission president, the bidders accepted to join the tender are declared and in pursuit of it the bidders accepted are invited to sign tender specifications and declare their bids orally. In the end of the declaration of bids the tender concluded accordingly to the Art.41.

Negotiated tender procedure is regulated under the Articles 50 and 51 of the Law numbered 2886. According to the Art. 50 taking the offers do not depend on a certain form. In this procedure tenders can be made by taking oral and written offers and by agreeing on a tender price. In the decision of tender, the form of offers, the tender price and the issue of why the awarded party is preferred have to be written. In the Art.51 the subjects of negotiated tender procedure are regulated as clauses “(a) to (p)”. For the subjects existing in the clauses (a), (b), (c), (d), (i), (l) and (p) it is not obligated to arrange the tender specifications document, to get a guarantee and to make a contract. For the subjects existing in the clauses (i), (l) and (p) the assent of the Ministry of Finance is required.

All the contracts made in accordance with these procedures have to be signed by each public administration’s authorizing officer.

Towards the explanations made above, implementation of these two Laws (numbered 4734 and 2886) depends on the subject of the tender and of which administration is the tender made by. They have also differences in terms of tender procedures. Accordingly to the scope of work, the procedures given above can be followed by the bidders.