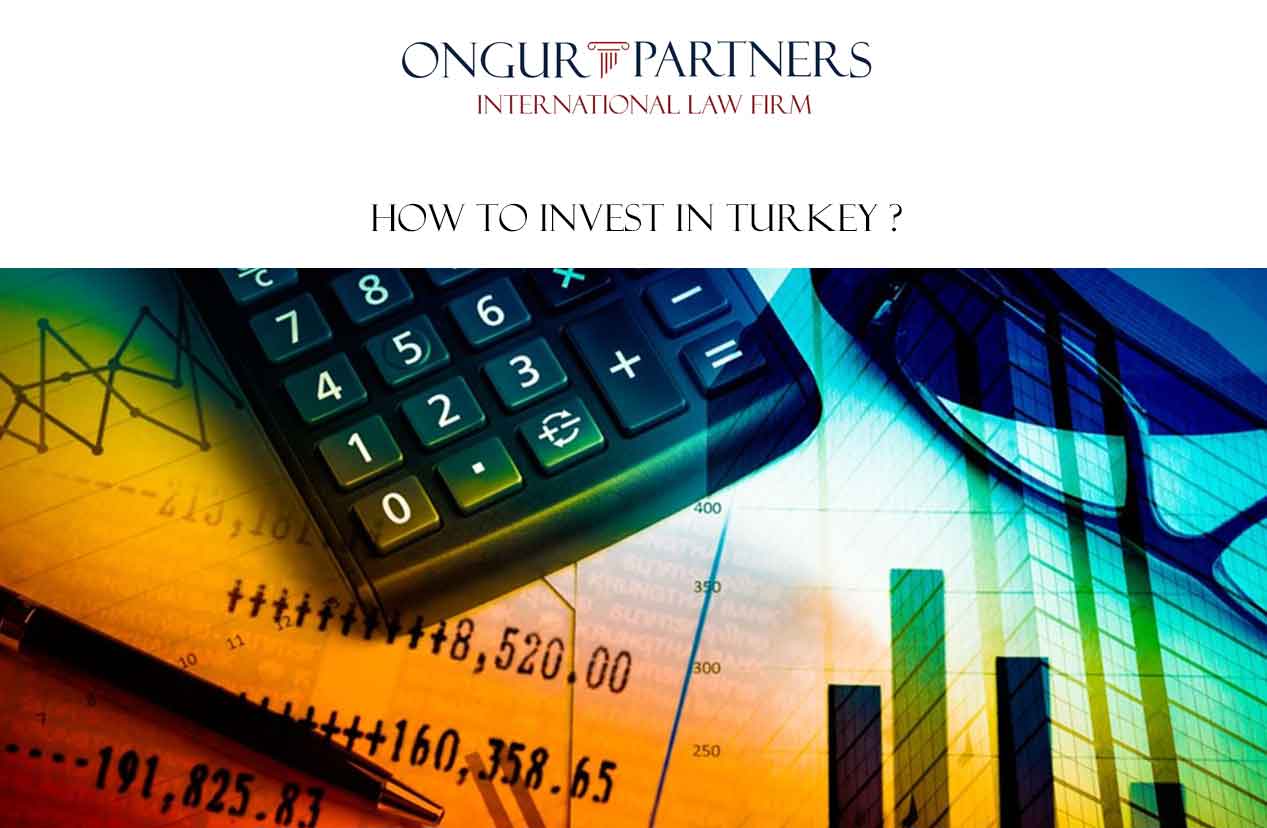 How to invest in Turkey

HOW TO INVEST IN TURKEY ?

The legal framework of the Foreign Direct Investments are regulated by the Law numbered 4875 and dated 17.06.2003 (hereinafter “no. and dd.”). This law is structured as a legal guideline for investors, which consists of 7 Articles and regulates general rules and principles about FDI. Additionally, the “Mutual Protection and Promotion of Investments Agreements” (hereinafter “MPPI) are applicable to the Foreign Direct Investments. Turkey has signed MPPI agreements with 80 countries and 64 of these agreements entered into force.

In a brief definition, foreign investment can be defined as the transfer of movable and immovable assets from one country to another for the profit of multinational companies under partial or complete supervision of asset owners by means of contributing welfare of the invested country.

The concept of foreign investors classified into two groups in the Article 2 of FDI Law. The first group consists of real persons who possess foreign nationality and Turkish nationals who are residents abroad. The second group is foreign legal entities established under the laws of foreign countries and international institutions.

Instruments that are transferred from abroad are defined as follows:

Instruments that are provided domestically are defined as follows:

III.  What are the fundamental principles that Foreign Investors shall be subject in Turkey?

The fundamental principles, which foreign investors shall be subject to, are regulated under the title of “Principles Regarding Foreign Direct Investments” in Article 3 of Law no. 4875.

According to sub-paragraph (a) of Article 3 of Law no. 4875, firstly the freedom of investment and principles of equal treatment are regulated. Accordingly, unless otherwise stipulated by international agreements and provisions of specific laws, foreign investors are free to invest directly in Turkey, and they are subject to equal treatment with domestic investors.

In the regulations regarding expropriation and nationalization, it is stipulated in sub-paragraph (b) of Article 3 of Law no. 4875 that the direct foreign investments cannot be expropriated and nationalized unless required by the public interest and their considerations are paid in accordance with the current legislation. With the regulation included in the Law, it is assured that the general regulations and principles on expropriation and nationalization specified in Articles 46 and 47 of the Constitution of Republic of Turkey are also applied to foreign investments without exception.

Another principle, stated in sub-paragraph (c) of Article 3 of Law no. 4875, is the principle of free transfer. In line with this principle, foreign investors can freely transfer the followings abroad through banks and special financial institutions: the considerations of net profit, dividend, sale, liquidation and indemnity; amounts arising from license, management and similar agreements; and foreign credit capital and interest payments arising from their business and activities within Turkey.

The regulations concerning access to real estate in Turkey can classify into 3 categories.

In paragraph (d) of Article 3 of Law no. 4875, freedom of access to real estate was granted for foreign investors. Also the condition of access to real estates regulated under Deed Law no. 2644, Article 35.  The legal and de facto conditions are taken as basis for the determination of the reciprocity. According to these provisions, in the context of real estate acquisition, it is essential that where land property right is not entitled to the citizens of a country, foreign state entities to the citizens of the Republic of Turkey the same rights that it entitles to its citizens. It is a fact that ; after the decision of Constitutional Court regarding the real estate access it should

It is stipulated that one can resort to national or international arbitration or other dispute settlement methods besides recourse to appointed and authorized courts for the regulation drawn up for the resolution of disputes of a foreign nature and disputes arising from investment contracts subject to private law as well as investment disputes arising from public service privilege stipulations and agreements between foreign investors and administration, provided that the conditions specified in the relevant legislation occur and the parties mutually agree.

In case of employment of foreign personnel, the work permits for the personnel with foreign nationalities to be employed at companies, branches or organizations that have been established within the scope of Law no. 4875 are granted by Ministry of Labor and Social Security. More information on this subject shall be addressed in the following sections.

The last principle regarding foreign investments that is included in the Law is about liaison offices. According to this principle, The Undersecretaries of Treasury is authorized to permit foreign companies that are established under the laws of foreign countries to open liaison offices, provided that they do not engage in commercial activities in Turkey.

The partnerships which have been established by contractual agreements under names such as incorporated partnership consortium, business partnership, joint venture and partnerships that do not bear the specific qualities of the companies stipulated in TCL are deemed as unincorporated companies as far as the application of the Law is concerned. The Joined-Stock-Company and Limited Liability Partnership are the most commonly used company types in Turkey.

A Joint-Stock-Company is a commercial company which is founded by at least five people to deal with a particular economical subject and purpose through a contract under a title and whose capital stock is stated and divided into shares, and which is liable for its debts only with its amount of assets, limited with the capital that the partners subscribed liability, has legal identity and limited capacity.[3] Joint-Stock-Companies are stipulated by Articles 269 etc. of TCL.

A “Limited Liability Company is a company established by two or more persons, real or legal, under a commercial title, the liability of the partners of which is limited with the capital they have undertaken to provide and the capital stock of which is certain.”According to Article 504 of TCL, the number of partners in a limited liability company cannot be less than two and more than fifty.

In practice, it is seen that foreign investments in Turkey are mainly made by the methods of affiliate to privatization or merger and takeover. There is a regulation for foreigners to affiliate to privatization in Article 14 of the Law no. 4046. The followings are stated in this Article: “Sales and transfer of real estate to foreign real persons and legal entities, within the framework of implementation of privatization according to the provisions of this Law, are subject to the provisions of applicable legislation by taking principle of reciprocity into consideration.”

VII. How does working permit issue for foreigners regulated in Turkish Law?

Work permits of foreigners, which were regulated by different laws and executive orders, are endeavored to be collected under the same umbrella by Law no. 4817 put into effect. Since the permissions issued by different institutions cause unsound comments about foreign employees and inability of supervision of these workers in Turkey, Law on Work Permits For Foreigners has been prepared for the purposes of preventing unfair competition and unemployment in Turkey, bringing the unrecorded earnings in our economy and because of the necessity of concentrating work permits at a single center in order to fight against employment of illegal workers in terms of economical status and labor market in Turkey as well as to fulfill our international commitments.[6]

The incentives provided by the government have contributed greatly to the development of private sector in Turkey.[7] There are some attractive incentives in Turkey concerning Foreign Direct Investments such as interest support, tax exemptions, investment funds, technology development scenes etc. Additionally, Turkey has bilateral prevention of double taxation agreement with 68 countries. Also various exemptions and incentives can be benefited from depending on the region to be invested in. If we are to examine these regions separately;

Some advantages such as income tax stoppage support, insurance premium support are provided to people who shall invest in such regions.

There are some sectoral, provisional and project based incentives to be introduced, which are in the process of preparation, soon in Turkey. That is why we recommend investors to check out relevant regulations in the actual term of investment.

It is a fact that the process of Turkey’s accession to EU has deeply affected Turkish legal system, and crucial amendments are made since 2000. These revisions and amendments are concluded in the field of FDI Law as well. In particular, the new principles which are introduced by new FDI Law such as freedom of investment and national treatment, access to real estate, expropriation and nationalization restrictions, applicability of ADR and arbitration etc. are very effective and positive provisions to attract and protect Foreign Direct Investors in Turkey. Moreover, newly structured public institutions are mindful and fruitful to support investors during the bureaucratic term of investment. As a result of new legal system and efforts of administrative organizations, quality and quantity of FDI has been rapidly increasing in Turkey since 2000. The actual situation and economical/statistical indicators are available at: http://www.invest.gov.tr

[1] This paper is prepared for the purpose of informing our web users. ONGUR ERGAN Law & Consulting Office does not recommend to users to take decisions and/or to start actions based on this study, and we do not accept any responsibility for these kinds of actions.

[5] Updated regulations regarding this issue can be followed at  http://www.oib.gov.tr.