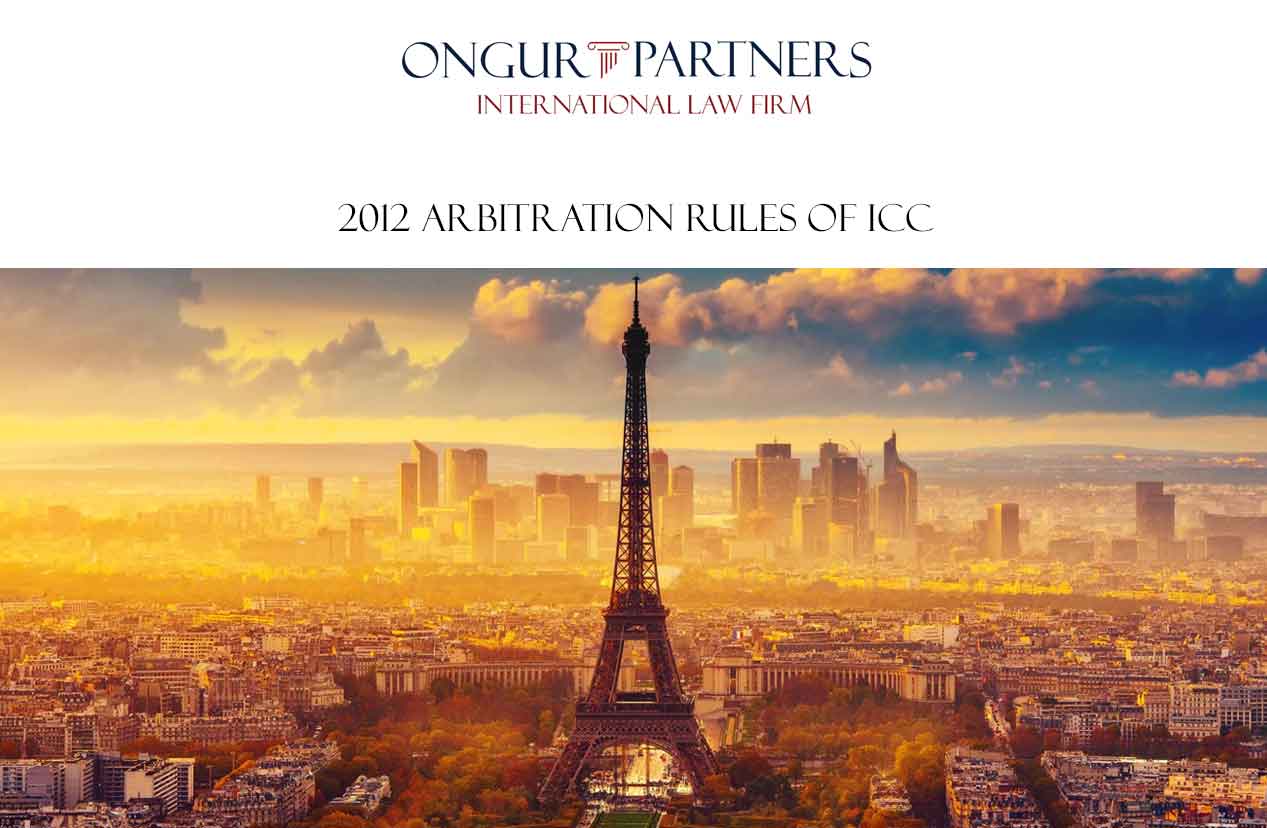 Abstract: The purpose of this article is to explain the principle characteristics of the new ICC Arbitration Rules that will come into force on 1st of January 2012 and to analyze how they differ from the prior version. The author focuses to substantial amendments, major procedural innovations, new introduced mechanisms and de-regulated rules of existing ICC principles. In the mean time, the need and reasons for introduction of the new rules are explained in order to provide practical understanding of actual ICC Arbitration mechanism.

The International Chamber of Commerce[1] [“ICC”] has a prominent role in the field of world business by promoting trade and investment, open markets for goods and services, and the free flow of capital since 1919. In a brief definition, the main aim of ICC is to assure effective and consistent actions in the economic and legal fields in order to contribute to the harmonious growth and the freedom of international commerce[2]. Over the years, the ICC has grown into a far-flung international organization with members in more than 150 countries and National Committees[3]. ICC’s international network assured a multidimensional understanding of new patterns of the business and uncontestable contribution to the international commerce.

Additionally, the International Court of Arbitration [“ICC Court”] which was founded in 1923 is remarkably improved the ICC’s value and provided a unique functionality to the organization. Nearly for a century, the ICC has been providing significant juridical supervisions in terms of providing dispute resolution mechanisms in line with international business requirements due to the need of justice free from state interference.

Nowadays,  ICC is known as one of the famous institutions for the resolution of international commercial disputes and its rules of arbitration are one of the most respected and implemented sources of the international business community.

The ICC rules of arbitration dated 1998 were issued in response to the ICC’s evolving arbitration experience and legal developments in the field. However, fast global developments and globalization required expectation of rapid, cost-effective and efficient dispute resolution in the process of ICC Arbitration. Within this scope, ICC Arbitration Rules have been the subject of criticism by the international business community.

Accordingly, the preparations of new arbitration rules are commenced in 2009. The ICC Commission on Arbitration which contains 620 dispute resolution specialists from 90 countries provided their experiences and advices for a more efficient arbitration rules codification. Additionally, a sub-committee to be constituted from 200 members drafted the New ICC Arbitration Rules in comply with international business community expectations. The new rules were unveiled at an ICC Conference in Paris from 12th to 13th September 2011.

Majority of the changes that are accomplished in the new ICC Arbitration Rules aims to make arbitration procedure faster, cheaper and more efficient. In comply with this purpose, Article 22, 24, 27, 37 and Appendix IV of the new arbitration rules put forward innovative provisions to ensure efficiency of the arbitration process. Within this scope, Article 22(1) set forth, the arbitral tribunal and the parties shall make every effort to conduct the arbitration in an expeditious and cost-effective manner, having regard to the complexity and value of the dispute.

According to Article 22(2) of the new arbitration rules, in order to ensure effective case management, the arbitral tribunal is authorized to adopt such procedural measure as it considers appropriate, provided that they are not contrary to any agreement of the parties. This amendment ensures adoption of required procedural rules in line with peculiarities and value of the cases; thereof by implementation of this provision the arbitral tribunal can adopt appropriate procedural measures in line with complexity of the case as well.

One of the unique features of ICC arbitration process in ensuring that the award ultimately rendered addresses all of the issues in dispute is a document called the Terms of Reference, which is to be prepared by the Arbitral Tribunal at the outset of the arbitration. No document of this type is required under any of the major international arbitration rules, whether ad hoc or institutional[6]. The procedural measures regarding the Terms of References are de-regulated by the new rules as well in order to provide efficiency in the process. In line with this aim Article 24 of the new rules set forth that, the parties are required to attend an early case management conference at the time when the arbitration’s Terms of Reference are drawn up, or shortly afterwards. Additionally numerous case management techniques are introduced in Appendix IV[7] of the ICC 2012 Rules and in the ICC ‘s report on Techniques for Controlling Time and Costs in Arbitration[8]. The case management referred to in Appendix IV includes but not limited with the following techniques:

Concerning award drafting process, some new techniques are introduced by the new rules as well. According to Article 27 of the rules; once arbitral proceedings are closed, the tribunal is required to inform the Secretariat of the ICC Court of the date by which it expects to send its draft award to the ICC Court for approval[9]. This provision aims to avoid time consumption in the process of both award drafting and scrutiny that was taking long time in some complex cases. Additionally, the expeditious and cost effective case management provision that is introduced by Article 22(1) is reflected for final stage of the arbitration process by Article 37(5). As a result of new provision, in making decisions as to costs, the arbitral tribunal may take into account such circumstances as it considers relevant, including the extent to which each party has conducted the arbitration in an expeditious and cost-effective manner.

The lack of appropriate legal measures in terms of emergency situations are criticized during the implementation of 1998 ICC Arbitration rules. Taking into account that functional emergency measures are set forth by several arbitration institutions[10], the need to introduce similar provisions are required by the international community.

In the process of implementation of 1998 ICC Rules the arbitral tribunals confronted with problems where more than two parties are involved to the dispute[12]. Taking into account that majority of the disputes arise out among more than two parties, the lacks of the provisions dealing with multiple parties were not in line with recent international business requirement. Thereby, the multiple parties, multiple contracts and consolidation are set forth by Article 6, 7, 8, 9 and 10 of the new Arbitration Rules.

It is a fundamental principle of arbitration law that any submission to arbitration must be based on the agreement of the parties. Hence, the new rules dealing with multiple parties, joinder of additional parties, and consolidation of the arbitrations are all stated to be subject of Article 6(3) to Article 6(7), which require the Court to be satisfied that parties are party to an arbitration agreement.

The provisions regarding the joinder party are set forth by Article 7 of the new ICC Rules. On this basis,  a party may join an additional party to the arbitration by submitting a ‘Request for Joinder’ of such party to the Secretariat prior to the confirmation or appointment of any arbitrator, or at any time after that date, provided that all parties to the arbitration, including the party to be joined, have consented to the joinder.

Claims between multiple parties are introduced by Article 8 of the new ICC rules. In this respect, in arbitrations involving multiple parties, any party may make a claim against any other party provided that no new claims may be made after the Terms of Reference are signed or approved by the Court without the authorization of the arbitral tribunal.

Additionally, a new mechanism introduced by the new ICC Arbitration Rules in terms of arbitrators’ availability and convenience as well. According to Article 11(2) of the new rules, before appointment or confirmation arbitrators are required to sign a statement of acceptance, availability, impartiality and independence.

Moreover, a new mechanism is introduced regarding the arbitration cases where a party is a sovereign state or state entity, the ICC Court may appoint arbitrators directly instead of relying upon the proposal of the ICC’s National Committees.

Taking into account that the arbitrator appointment procedure were taking long period for some particular cases, these new provisions would ensure avoidance of time consumption and direct supervision of the Court in the said process, whenever it is needed.

Under the 1998 Rules, where a party raises a jurisdictional challenge the Court makes a prima face decision as to whether the arbitration may proceed. However, according to new ICC rules such a decision will be made by directly arbitrators, unless the Secretary General of the ICC refers the matter to the Court.

It is a fact that, the ICC 2012 Rules introduced more flexibility and cost efficiency in the administration of ICC arbitrations and speed up all arbitration process. The new rules take genuine steps to improve ICC arbitration and to deal with community’s criticisms related to the ICC procedure. The implementation of the new rules will indicate whether ICC arbitration becomes rapid or cost-effective because of the changes to the rules. However, in theory the amended procedural provisions seem in line with expectations of ICC users.

Consequently, the new ICC Arbitration Rules will be implemented by arbitral tribunal as of 1st of January 2012.The effects of the amendments would be observed by both international community and the ICC users soon. However, taking into account the innovative patterns of international business and fast global developments, the law always will be quite far being a panacea neither now nor in the future.

The ICC Rules of Arbitration 1998

The ICC Rules of Arbitration 2012

** The reader should take into account that this article aims to analyze only major and substantial amendments in the new ICC Rules and it should not be regarded as a legal advice.

[1] The ICC is established in Paris as an “association” under the law of 1901 governing non-profit association by the contribution of Belgium, France, Italy, the United Kingdom and the United States.

[10] The Stockholm Chamber of Commerce [http://www.chamber.se/about-the-region.aspx] and Singapore International Arbitration Centre [http://www.siac.org.sg/ ] has been performing the emergency arbitration procedures as well.