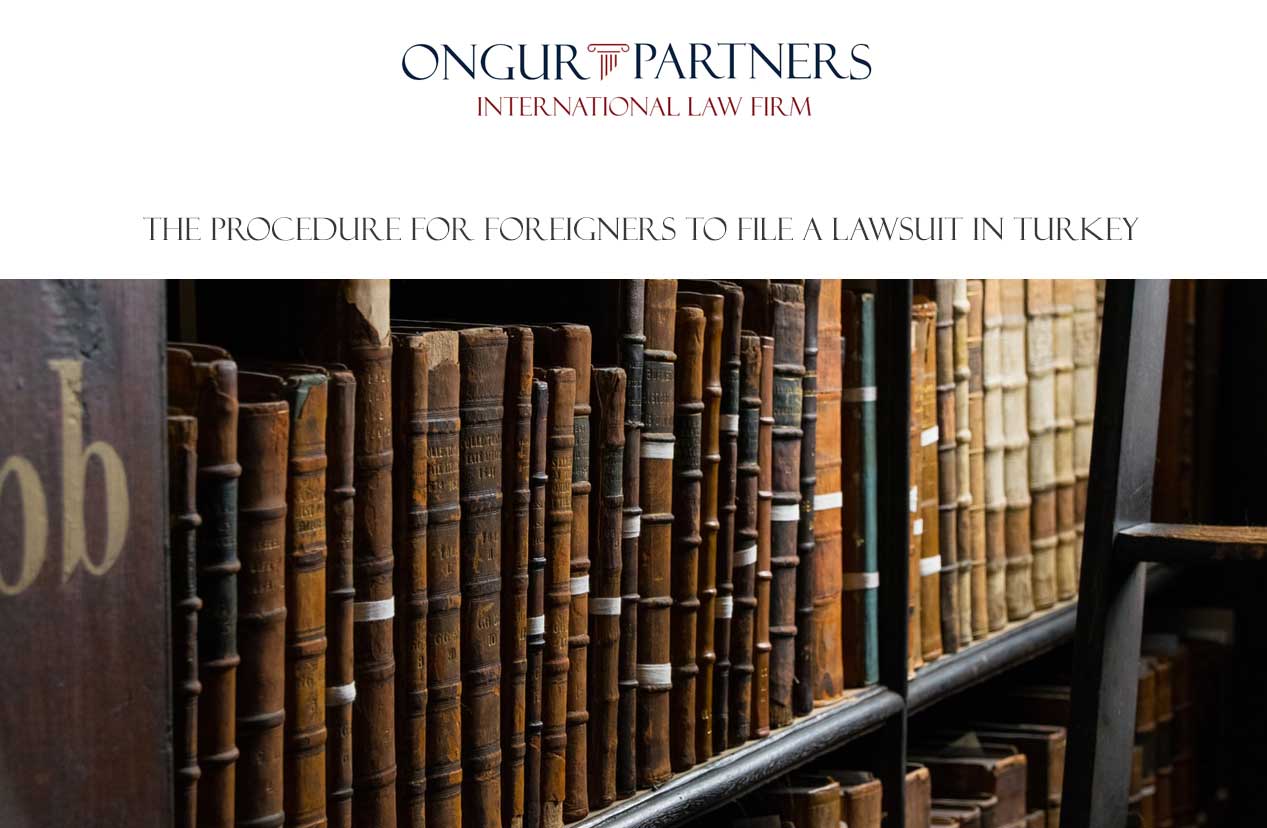 The Procedure For Foreigners To File a Lawsuit In Turkey

Firstly, Article 84 of Turkish Code of Civil Procedure, numbered 6100, stipulates that “security in an adequate amount should be provided to prevent any possible loss on the defendant’s behalf, in cases which mainly include (i) a citizen of Turkey not residing in Turkey initiating a lawsuit, and (ii) the plaintiff having gone bankrupt before.”

Additionally, as per Article 48 of MÖHUK “foreign individuals or legal persons who file a lawsuit in Turkey, intervene in a lawsuit before Turkish Courts, or initiate execution proceedings before a Turkish court shall be required to provide security whose amount shall be determined by the court to cover the expenses of the legal procedures and proceedings as well as losses or damages of the other party”. The exemption from this law is available with the principle of reciprocity which will be examined below.

In the scope of the above referred two laws, respectively regulation regarding security within the scope of HMK applies to Turkish citizens whose habitual residence is not Turkey, while the regulation in MÖHUK 48 applies to all foreigners and stateless persons who would file a lawsuit in Turkey.

While it is compulsory to provide security for foreign individuals or legal persons who file a lawsuit, intervene in a lawsuit, or initiate execution proceedings before a Turkish court, Article 48 of MÖHUK concludes “the court may exempt the plaintiff, intervener, or applicant for execution from providing security, on a reciprocal basis”. As per this regulation, the obligation to provide security is subjected to reciprocity; in case reciprocity stipulation is met, the plaintiff would be exempt from providing security. In Turkish law, reciprocity stipulation can be satisfied in three ways: contractual, statutory, and de facto.

Contractual reciprocity is deemed to be met if there is a rogatory agreement or security exemption agreement between Turkey and the state of the foreigner who files a lawsuit, intervenes in a lawsuit, or initiates execution proceedings before a Turkish court. Since Turkey is a contracting party to the Hague Convention of 1 March 1954 on Civil Procedure, it cannot claim security to be provided from nationals of other contracting parties. As per Article 17 of the Convention:

“No security, bond or deposit of any kind, maybe imposed because of their foreign nationality, or of lack of domicile or residence in the country, upon nationals of one of the Contracting States, having their domicile in one of these States, who are plaintiffs or parties intervening before the courts of another of those States. The same rule shall apply to any payment required of plaintiffs or intervening parties as security for court fees.”

According to the aforementioned Article, foreigners who are exempt from providing security when filing a lawsuit in Turkey can be identified by looking at the contracting parties to the Convention. These states are:

Statutory reciprocity describes that provisions regarding security is not aggravated in-laws of that certain foreign state as against the conditions Article 48 of MÖHUK provides for.

Unless these two reciprocity principles are met, the relevant foreign state de facto exempts Turkish citizens from providing security to file a lawsuit in that state, then it can be concluded as de facto reciprocity.

Furthermore, as per the preamble of Article 48 of MÖHUK, the court may exempt the plaintiff, intervener, or applicant for execution from providing security, although reciprocity condition wasn’t met by any means. Under these circumstances, a Turkish judge has the discretion to exempt a plaintiff from providing security, even in cases where contractual, statutory, or de facto reciprocity is absent.

Obligation to provide security within the scope of MÖHUK is an issue the court interprets ex officio. Accordingly, the Turkish Supreme Court has ruled that such an obligation is a matter of public order. Even so, in a contract, the foreign plaintiff renounces obligation to provide a security or it has been declared by the defendant during the process of lawsuit such renouncement is null and void. Regarding established decisions of the Supreme Court, the courts cannot start an investigation on merits in cases where reciprocity is absent and no security is provided. If the court gives a ruling under these circumstances, the Supreme Court reverses such judgment given by the court of the first instance.

According to Turkish legislation, Article 84 of HMK applies to Turkish citizens whose habitual residence is outside of Turkey. While Article 48 of MÖHUK applies to all foreign individuals or legal persons who file a lawsuit, intervene in a lawsuit, or initiate execution proceedings before a Turkish court, and the court would investigate whether the reciprocity condition is fulfilled or not. Unless it is not fulfilled in any manner and the judge used his/her discretion to exempt the plaintiff from providing security, then the plaintiff must provide suitable security that the court will find appropriate for the proceedings to be conducted.