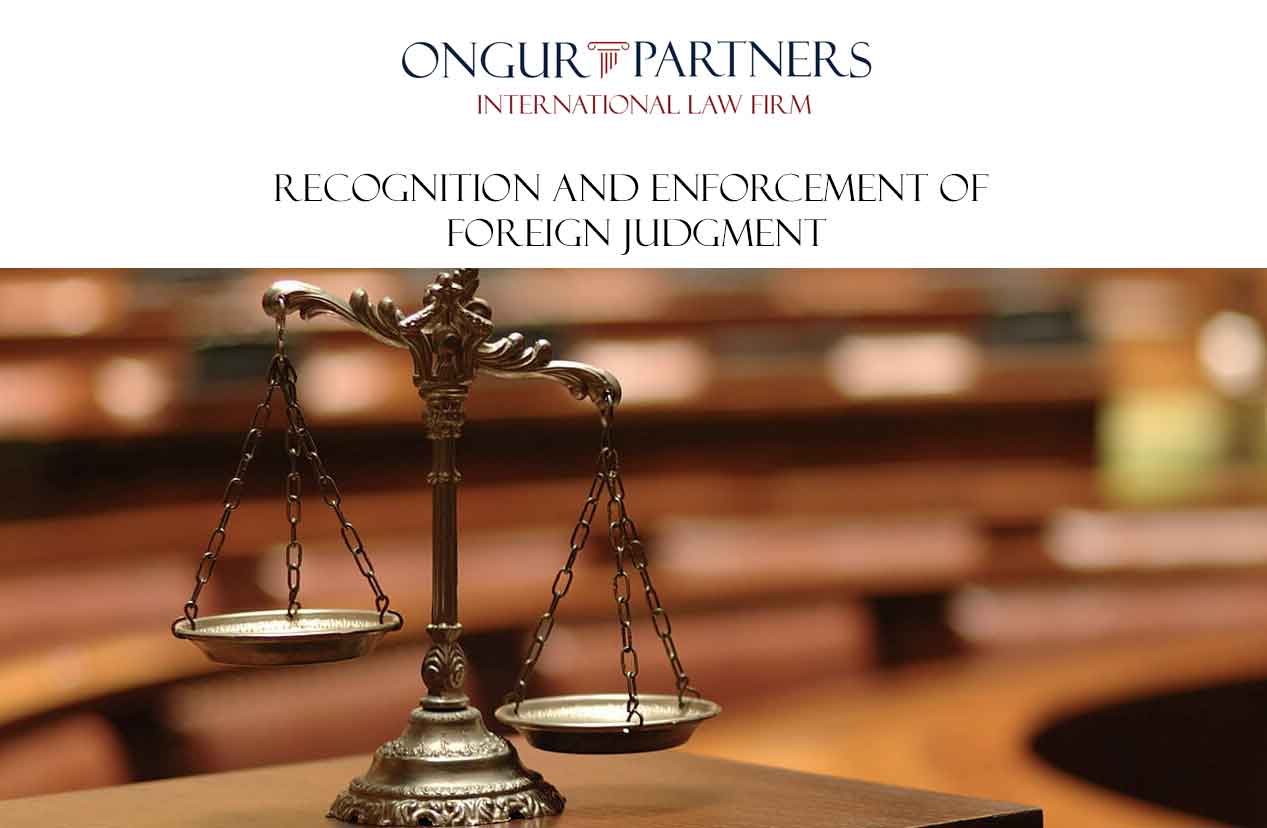 Recognition and Enforcement of Foreign Judgment

Recognition and Enforcement of Foreign Court  Judgments in Turkey

Legality and application of foreign judgments in Turkey depends on completion of several procedures which are called enforcement and recognition in Turkish Law. The provisions about recognition and enforcement take place in Law numbered 5718 dated 22.11.2007.[1]

Recognition is regulated under Art.58 of Law numbered 5718. According to this Article recognition is the procedure which provides final evidence and definite judgment statute to the foreign judgment.

On the other hand enforcement is regulated under Articles 50 and the following in Law numbered 5718 and defined as the procedure which provides enforceability to the definite judgments decided by foreign courts.

In accordance with the comments above, it is necessary to find out in which cases the award of enforcement, in which ones the award of recognition will be needed. As it is well known, awards of courts can be clarified in three according to their results as; constitutive, performance and declaratory awards. In this context, the matter in dispute in recognition cases is the constitutive awards which provides a new legal statute, remove or changes an existing legal statute. For instance adoption, change of name, divorce awards are constitutive. As a consequence these type of awards given by foreign courts need to be recognized to be valid in law, in Turkey.

On the other hand the matter in dispute in enforcement cases are performance awards which result in doing, not doing or giving something. As an example, compensation, subsistence and alteration of curatorship awards can be given. For this reason, awards which are given by foreign courts and have to be executed in deed, in Turkey, like compensation, subsistence and alteration of curatorship, need to be ratified.

According to the principle of Turkish private law, neither during recognition cases nor enforcement procedure Turkish courts are not able to observe the compliance with substantive law of the decision given by foreign court.[2] By force of principal called “revision au fond” which is also accepted in Turkish Law, the decision of foreign court can be only examined about the conditions of recognition and enforcement.

On the other hand recognition and enforcement is not only regulated in Law numbered 5718. States also sign bilateral or multilateral conventions among them, regarding recognition and enforcement of decisions of foreign courts. Turkey is also counterparty of several conventions in terms of validation of the foreign court decisions. For example European Convention on Recognition and Enforcement of Decisions Concerning Custody of Children and on Restoration of Custody of Children (Luxembourg-20.05.1980), Convention on the Recognition and Enforcement of Decisions Relating to Maintenance Obligations (Lahey, 02.10.1973) are can be indicated as example of these kinds of conventions. Execution area of these conventions will be determined in accordance with Republic of Turkey Constitution Art.90 and the principals lex specialis , lex posterior. If it is necessary articles of conventions will be applied instead of articles of Law numbered 5718.

The procedure of enforcement is regulated between Art.50-57 of Law numbered 5718. According to the Art.50 to demand enforcement, firstly the existence of foreign court’s decision is needed and this decision has to be approved in accordance with the Law of that country where the Court decision is taken. In the same Article of the Law another condition is requested which is the decision must be given regarding to a civil action. Thereby only a decision given regarding to a civil action can be the matter in dispute of enforcement case. Once again in the Art.50 of the Law numbered 5718 about the clauses regarding personal rights in the criminal decisions, enforcement judgment can be demanded.

At this point, the issue of which court will be competent and in charge to execute enforcement contraption, has to be discussed. Thus, under the Art.51 of Law numbered 5718 this issue is regulated with the topic of “Competence and Jurisdiction”. According to the article, in enforcement cases civil courts of general jurisdiction are in charge. In the same article it is regulated that courts in the same place of the person’s domicile in Turkey, against whom enforcement is demanded are competent. If the person doesn’t have a domicile in Turkey, the courts of the place of person’s residence will be competent. If still the person doesn’t have a residence in Turkey, the courts of Ankara, İstanbul or İzmir will be competent. According to the Art.52 of Law numbered 5718 everyone who has legal interest can demand enforcement with a petition. The samples of petitions accordingly the number of parties must be added. Again in accordance with the Art.52 these issues must be written in the petition:

Art.53 of the Law is regulating the documents that must be added to the petition, these documents are:

According to the Article above the Law numbered 5718 require the original and the copy of decision approved in accordance with the procedure. The approval according to the procedure means that the decision contents the endorsement of apostile. This endorsement serves the recognition of a document arranged by a foreign institution, in another country. Countries which are contractor of Convention of La Haye dated 1961 are editing endorsement of apostile to provide recognition to a document arranged by their own, in another country which is also contractor.

In the Law numbered 5718 the conditions required for an enforcement decision is regulated under the Article 54. According to the article:

The provisions regulating the “recognition” in the Law numbered 5718 are softer than the ones regulating the enforcement. The reason is that, unlike enforcement, recognition doesn’t provide result of execution. Recognition is regulated in the Law numbered 5718 under the Articles of 58 and 59. According to the articles in subject, to have a final judgment and a final evidence statute the determination of foreign award is needed to be made by Turkish court in respect of whether it includes the conditions of enforcement or not. In other words Art.58 of the law demands the conditions which are regulated under the Art.54. However according to the Art.58, the principal of reciprocity which takes place in Art.54 is not demanded. The statute of final judgment and final evidence enure starting from the date that the decision finalized. The Law numbered 5718 hasn’t regulated the procedure of recognition that’s why it should be admitted that the recognition depends on the same procedure as enforcement.

For instance in a decision of Court of Cassation, 11th Civil Chamber number,1995/8322 E, 1996/1655 K,11.03.1996 dated, Court of Cassation found the award of court of original jurisdiction in conflict with the law because of not examining the conditions of enforcement. In that act the defendant hasn’t invited to the court during proceeding and hasn’t informed about the case. The defendant has waived an objection about these situations during the enforcement proceeding. However the court of original jurisdiction decided the enforcement of foreign decision by ignoring this objection. In this context the award of court of original jurisdiction has been reversed by Court of Cassation because of being in conflict with the abrogated Law numbered 2675 Art.38/d.

In another decision of Court of Cassation, 4th Civil Chamber,1992/7081 E, 1993/2756 K, 18.03.1993 dated, the court of original jurisdiction has decided the enforcement of foreign decision in conflict with the abrogated Law numbered 2673 Art.38” in absence of original approved and translated copies of foreign decision”. Court of Cassation has also reversed this enforcement award because of deficiency of conditions needed for enforcement.